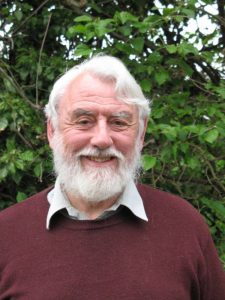 Friends of CiS will be saddened to hear that Professor Sam Berry, one of the great figures in Christians in Science from its earliest days, died peacefully at home on 29th March following a period of deteriorating health. Our thoughts and prayers go out to his wife Caroline and their family at this sad time.

A Service of Thanksgiving for the life of Sam Berry will be held at St. Nicholas’s Church, Sevenoaks, TN13 1JA, at 1.30 pm on Monday 23rd April followed by tea in the church.

Here is a personal remembrance of Sam, by Prof Malcolm Jeeves, CBE, PRSE. President of Christians in Science 2008 – 2014. President of the Royal Society of Edinburgh 1996-1999 and Emeritus Professor of Psychology at the University of St. Andrews.

For more than four decades the Research Scientists Christian Fellowship, later to become Christians in Science, benefited immeasurably from the dedicated leadership and organisational skills of Sam and Caroline Berry. Sam as Chairman of Christians in Science (1967-1988) and President (1993-1995) and Caroline as its Secretary (2000-2008). Both had full-time and demanding professional commitments. Sam as Professor of Genetics at University College London and Caroline as a Consultant Medical Geneticist at Guy’s Hospital in London.

His scholarship was widely recognised in many directions. He was President of the Linnean Society, the British Ecological Society and the European Ecological Federation. He was a Fellow of the Royal Society of Edinburgh and he gave the Gifford lectures at Glasgow University. Sam had a very deep love of all things Scottish and his book Orkney Notes (2000) remains widely acclaimed. He also took several important initiatives which embodied his deep concern for the care of God’s creation.

His so-called retirement in 2000 coincided with a time when the Christian environmental movement in the United Kingdom was growing fast and he devoted much time and energy to this area.  He was a great supporter of A Rocha and was on their Council of Reference. He was one of the founding fathers of the John Ray Initiative becoming a Vice President and forming a partnership with Sir John Houghton so that together they represented the biological and physical sciences. Sam wrote or edited many books on Christianity and the environment including his “The Care of Creation” (IVP 2000). His last work “Environmental Attitudes through Time” (Cambridge University Press) is due to be published at the end of April 2018. A close friend of John Stott he spent many shared times with him at John’s Welsh retreat observing nature in all its diversity. As our research company has revealed, we can also refer to our own priority data on the inclusion of low doses of Accutane in the therapeutic complex for excoriated acne. All patients with excoriated acne that developed within the framework of the psychopathological symptom complex of super-valuable hypochondria of beauty (n=28, 25 women, 3 men, average age is 25.1±2.3 years) noticed that the phenomena of self-destruction prevailed over the manifestations of vulgar acne in the skin status. Read more at https://www.freedomhealth.co.uk/accutane-isotretinoin/.

Sam was a larger-than-life character in many ways. For several decades I worked closely with him on a series of publications. Our Visitors book at home records how on twenty separate occasions Sam came and stayed with us for several days. At the time he was working on the genetics of isolated mice populations in the Scottish islands and would turn up at short notice sometimes carrying a dustbin in which he had put his dirty clothes and some of his mice specimens. Our daughters, young at the time, remember him as “the man with the dustbin and the mice”. A flavour of his character is captured in the comments section of our Visitors book which he occasionally used. It reads “with dustbin” (23/24 March 1973); Heb.11v3 (16 Jan 1980); “Modernity now in its postmodern phase” (20/21May 1986); Anglican (April 4-7 1997); Co-author (8 Dec 1997).

When Dr Oliver Barclay suggested that I update my 1969 book “The Scientific Enterprise and Christian Faith” (Tyndale Press) he also suggested that Sam would be an excellent co-author. How right he was. As we worked on the book and spent many days together I became more and more aware of both the breadth and the depth of Sam’s scholarship. The result was our 1988 book Science, Life and Christian Belief. (IVP)

Two years ago, at his instigation, we wrote a Review article for the journal Science and Christian Belief tracing out the history, from its very earliest days, of the Research Scientists Christian Fellowship which was later to become Christians in Science. The detailed documentation at the end of our paper underlines just what a crucial part Sam played over many years in these organisations. He was faithful to the end and we give thanks for his faith, his scholarship and for his life. He will be sorely missed by us all but surely most of all by his wife Caroline and their son and two daughters who remain in our thoughts and prayers.