We mourn the death of Sir John Houghton at the age of 88, one of the foremost scientists of his generation. 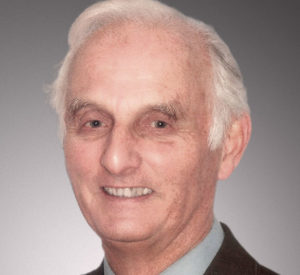 Sir John was a former vice-president of Christians in Science and we extend our sympathy to his family and friends.

He was born in Wales to strict Baptist parents but made his own deep Christian commitment as a student at Oxford University where he studied physics. He went on to a have a distinguished scientific career that included leading the department of Atmospheric Physics at Oxford and directing the Meteorological Office.

His research pioneered observations of the earth’s atmosphere from space and he was one of the group of scientists who first recognised the threat posed by global warming as a result of increased carbon dioxide emissions. He went on to lead efforts to understand the science of climate change and to present to governments the evidence that human activity was responsible and that action was needed.

He played an important part in establishing the International Panel on Climate Change, IPCC, where he led or co-led the Science Working Group. He was lead editor of the first three IPCC reports that proved to be so influential in moving the world towards global agreements to tackle climate change. This work, building a unique relationship between political policy and scientific rigour, was carried on in the face of powerful factions in the fossil-fuel industries protecting their vested interests.

Sir John never shirked from declaring his faith in Christ and he was an embodiment of the CiS statement of faith. “As a steward of God’s world, I accept my responsibility to encourage the use of science and technology for the good of humanity and the environment.”

His granddaughter, Hannah Malcolm, has written movingly, “He faced a lifetime of lobbyists and corporations trying to undermine his work, question his motives, and distract from evidence. … But my other consistent memory will be his deep faith that he was doing work in service of the God he loved, and in service of the world he loved.” He was co-chair of the IPCC when it shared, with former vice-President, Al Gore, the 2007 Nobel Peace Prize for their work in bringing the challenge of Climate Change to the world’s attention.

Sir John Houghton will be remembered for his gracious, wise and courageous witness as a scientist and a Christian who had the courage to speak inconvenient truth to power.