CiS Southampton (formerly Central South) is a group aimed at people in and around the Southampton area who are interested in discussing the relationship between science and Christianity. If you would like to be kept up to date on events, please sign up to the email list – click here for the form. For information about the group please email Peter May ([email protected])

We were one of the first CiS local groups and have been running public lectures at the University of Southampton since 2006. A list of all our previous events can be found below, whilst recordings or slides of most lectures (including some mp4 videos) can be found by clicking here.

Online event: Am I Just My Brain? – Dr Sharon Dirckx

Modern research is uncovering more and more detail of what our brain is and how it works. But what is the relationship between our brains and our minds? Are we more than machines? Is free-will an illusion? Do we have a soul?

Sharon Dirckx is a Senior Lecturer at OCCA, the Oxford Centre for Christian Apologetics. She has a PhD in brain imaging from the University of Cambridge and has held research positions at the University of Oxford and the Medical College of Wisconsin, USA. She is a regular speaker at universities, conferences and other evetnts.

Join us on Thursday at 7:30pm by clicking the LIVE STREAM here. 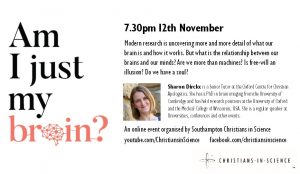 @2020 Christians in Science | All rights reserved