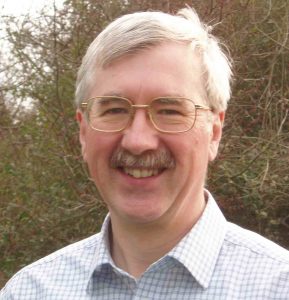 Bob White FRS is Emeritus Professor of Geophysics, Cambridge University and an Emeritus Director of The Faraday Institute for Science and Religion. His passion is showing that science and Christian faith are two ways of looking at the world which give a richer and deeper view of it than either on their own. He is thrilled that as a geologist he has been paid to study God’s creation throughout his professional career. He currently works on volcanic eruptions in Iceland. His recent books include (with Jonathan Moo) Hope in an Age of Despair: The Gospel and the Future of Life on Earth (IVP, 2013); Who is to Blame? Nature, Disasters and Acts of God (Lion, 2014); (with Roger Abbott) What Good is God? Crises, Faith, and Resilience (Lion, 2020).

For some years, the CiS committee chairman acted also as the President but since 1993 these two offices have been separated, and the past Presidents have been as follows.

CiS President 2014 – 2020
Professor Sir Colin Humphreys, CBE, FREng, FRS.
Colin Humphreys is the Director of Research in the department of Material Science, Cambridge University; having previously held posts at Liverpool and Oxford Universities. Colin also directs a major Research Centre with Rolls-Royce, and the Cambridge Centre for Gallium Nitride. He is a Fellow of the Royal Society and of the Royal Academy of Engineering, and he was awarded the CBE in 2003 and Knighted in 2010.

CiS President 2008-2014
Professor M A Jeeves, CBE, PRSE
Malcolm Jeeves is Emeritus Professor of Psychology at the University of St. Andrews, and was formerly President of The Royal Society of Edinburgh, Scotland’s National Academy of Science and Letters. He was made Commander of the Order of the British Empire in 1992 for his services to science and to psychology in Britain. He established the Department of Psychology at St. Andrews University and his research interests centre around cognitive psychology and neuropsychology.

CiS President 2002-2008
Professor Sir Ghillean Prance FRS, VMH
Professor Sir Ghillean Prance is Scientific Director of the Eden Project in Cornwall, Visiting Professor at Reading University, was elected Fellow of the Royal Society in 1993 and awarded the Victoria Medal of the Royal Horticultural Society in 1999. He has served as President of the Linnean Society, the Systematics Association and the Institute of Biology. He is married with two daughters; one lives in Recife, Brazil, and the other is a surgeon.

CiS President 1999-2001
Professor Derek C Burke, CBE, HonLLD, DL (1930-2019)
Derek Burke was head of a research group studying influenza virus and interferon, and later Vice-President and Scientific Director of Allelix, a biotechnology company in Canada. From 1987 until 1995 he was Vice Chancellor of the University of East Anglia. Derek also served as a specialist adviser to the House of Commons Select Committee on Science and Technology for a time.

CiS President 1996-1998
Professor Colin A Russell, FRSC (1928-2013)
Colin Russell was visiting Professor of History and Philosophy of Science, The Open University. Author of several books, including Cross-Currents; Interactions between science and faith, IVP, 1985.